For those who want to enjoy the north of the Costa Blanca in a different way, with all the privacy and comfort, here you will find the best holiday villas in Calpe, all with private pool. Doing a quick search, we will filter the best private villas in Booking to spend a few days of beach, family, barbecue and pool.
Book your villa in Calpe now!


Villas have become the accommodation of choice for those who want freedom and comfort. This will allow you to disconnect during your holidays on the beach and Calpe is a good choice for this. A unique and paradisiacal setting, symbol of the Costa Blanca. In the area, the Ifach Rock stands out, a rocky massif 332 m high that rises majestically over the Mediterranean Sea.

Selection of villas for rent in Calpe 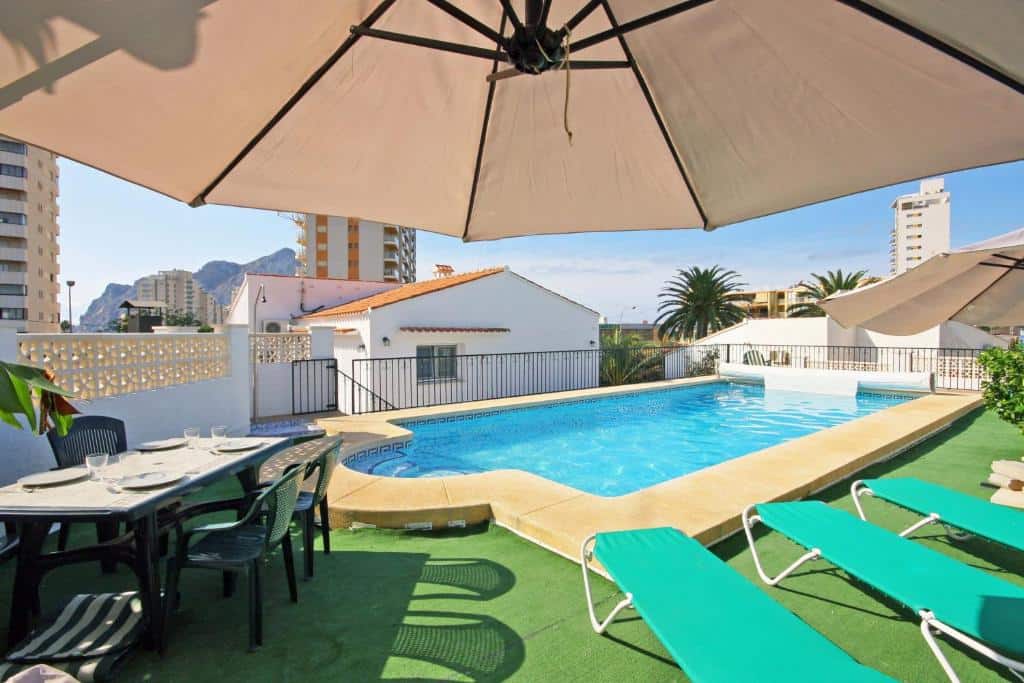 Located 300 metres from La Calalga Beach, this villa features an outdoor swimming pool with sun loungers and barbecue facilities. It offers free Wi-Fi, heating and air conditioning. The kitchen is fully equipped and there are 4 bathrooms with a shower. 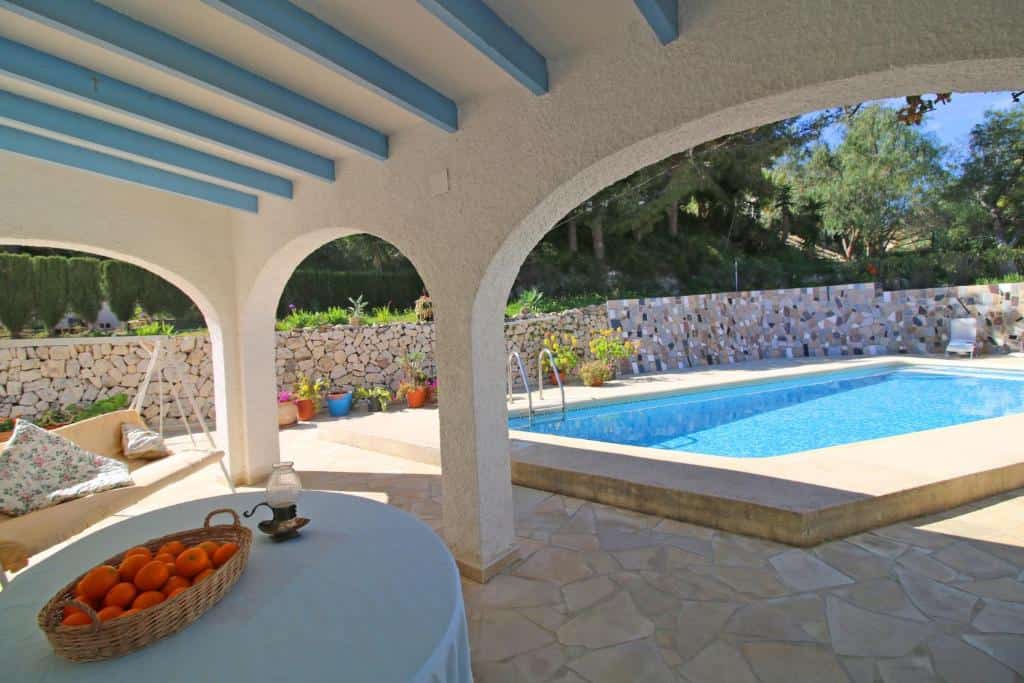 Holiday Villa Mia is a villa with a private pool in Calpe. It features barbecue facilities, a sun terrace, free Wi-Fi and free parking. It is equipped with 2 bedrooms, a flat-screen satellite TV, a washing machine and a kitchen with a microwave and dishwasher. Bed linen and towels are included. 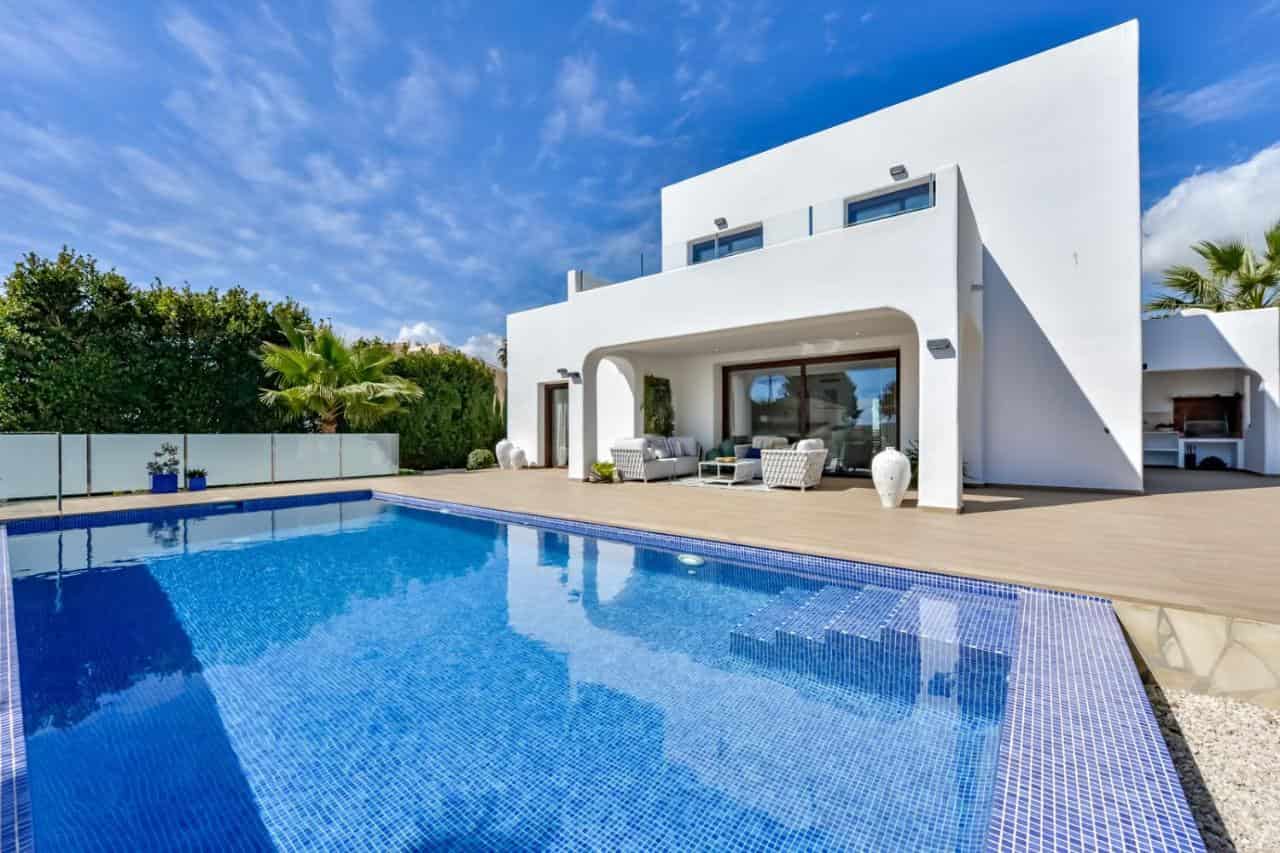 It is located in Calpe, near the Peñon de Ifach Natural Park. In addition to a private pool, this villa has barbecue facilities and bed linen and towels are provided. If you want to travel here by plane, Alicante Airport is the nearest airport and is 63 km away. 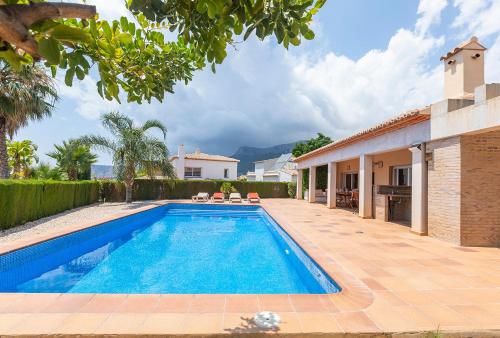 Casa Wohra features a hot tub. It has 5 bedrooms, 4 bathrooms with a bathtub, and an outdoor swimming pool with a garden and a nice barbecue area. The villa's kitchen is fully equipped with a microwave, dishwasher and washing machine. 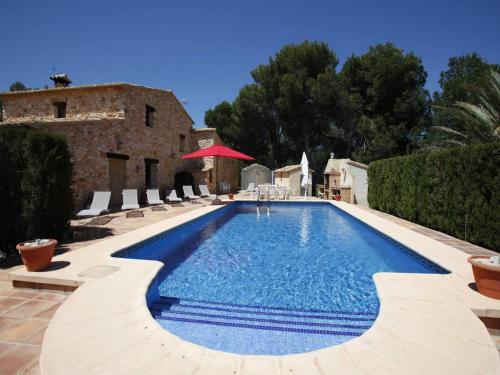 Located in Calpe, it offers free private parking, a private pool and a garden, as well as a terrace. The villa offers air conditioning in all rooms, 4 bedrooms, 3 bathrooms with bidet and a kitchen equipped with a dishwasher and microwave. 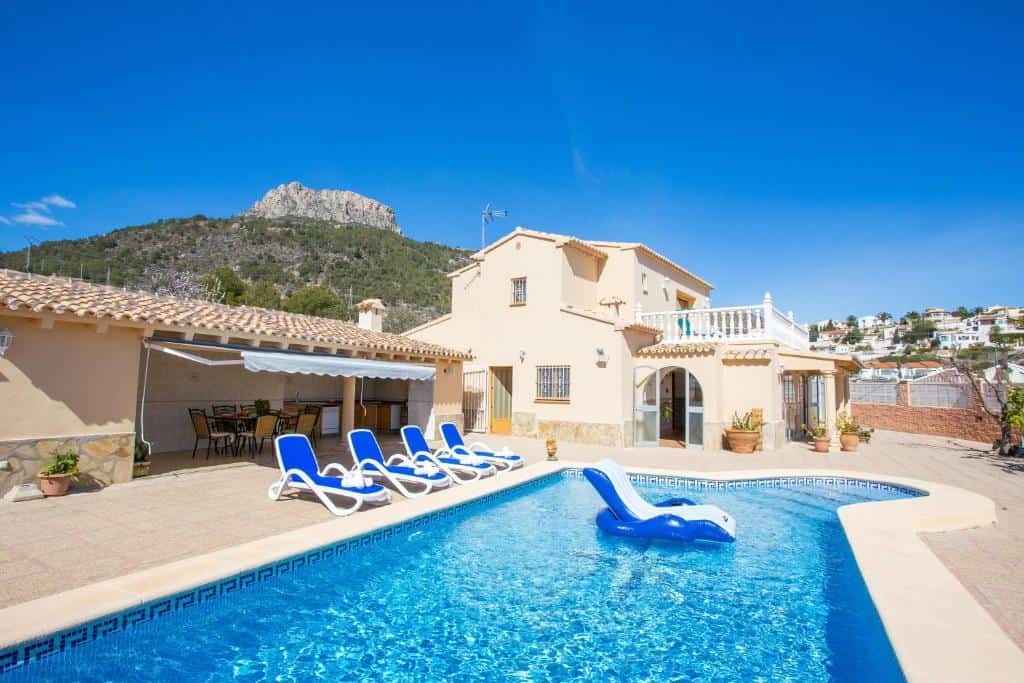 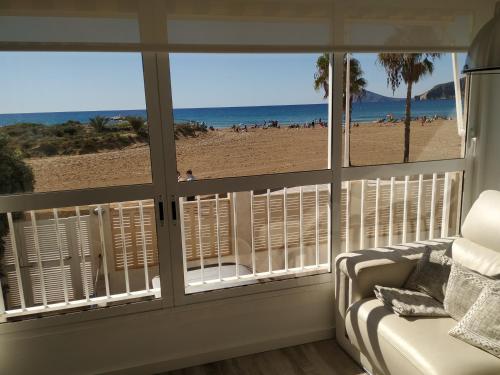 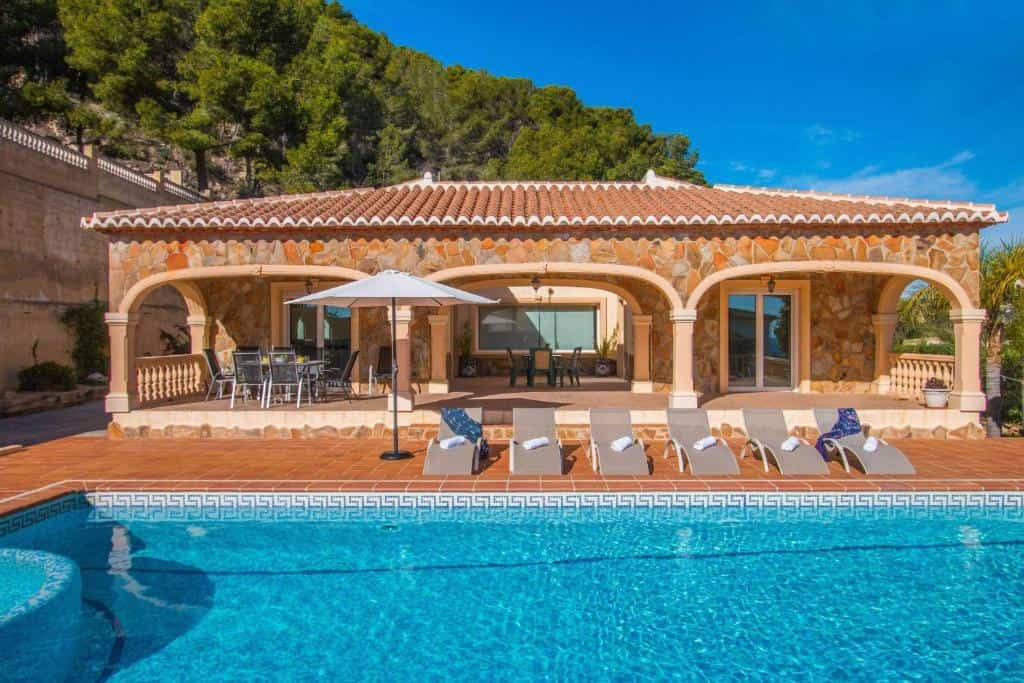 Villa Noa - PlusHolidays features 2 bedrooms with single beds and 2 bedrooms with double beds, 3 bathrooms with shower and hairdryer, a living area with dining table and satellite TV. It has a private outdoor pool and a spacious terrace with barbecue facilities.

Abahana Villas Capri is located in Calpe and features 4 bedrooms, 3 bathrooms with a shower and a kitchen with a microwave and a dishwasher. It offers free Wi-Fi, air conditioning, a private pool and free private parking. It also has a garden and a terrace. 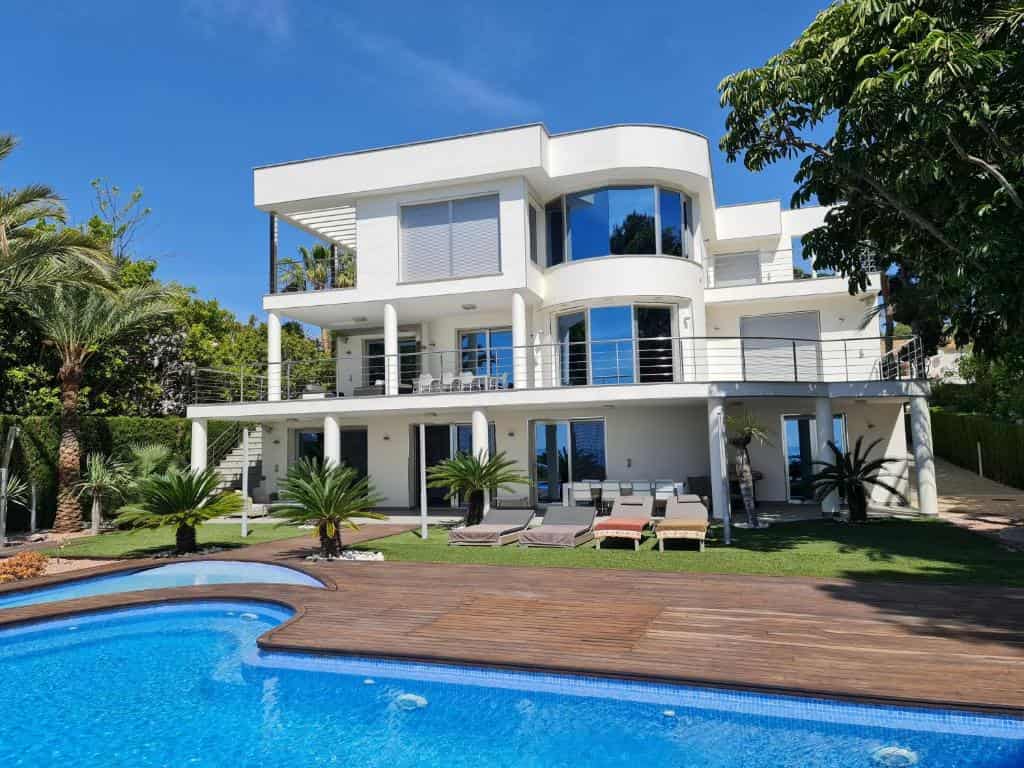 This villa in Calpe has 4 bedrooms, a flat-screen TV, a kitchen with dishwasher and microwave and 7 bathrooms, one of which has a hydromassage bathtub. It is just 100 metres from Cale del MallorquI, practically on the beachfront.

Spectacular villa with a Turkish bath and a private outdoor swimming pool. It is perfect for a couple, as it has 2 bedrooms, 2 bathrooms and bed linen and towels are included. The terrace overlooks the lake and there is free wifi in all rooms. 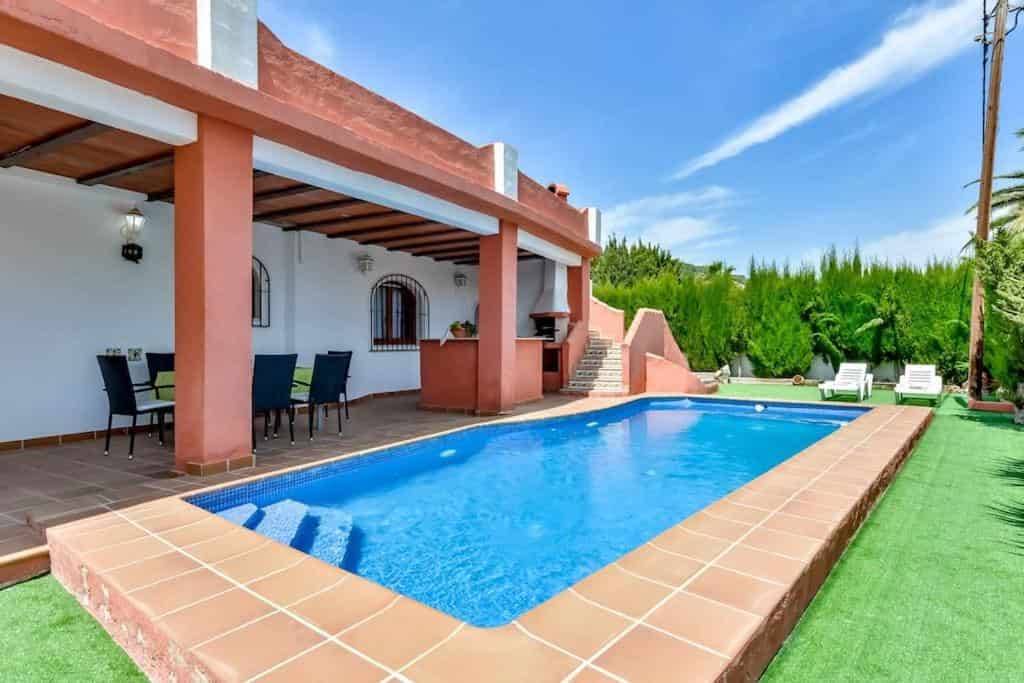 This holiday home is located in Calpe, in the Valencian Community. It offers barbecue facilities, swimming pools and sea views. The kitchen has a coffee machine, oven and dishwasher. The bathroom includes both a bathtub and a shower. The famous Daytona Rock Bar is 15 km away.

Calpe: the jewel of the Costa Blanca

Calpe is a town located in the province of Alicante, specifically in the Marina Alta region. Spending a holiday here is spectacular as it hides fantastic corners and offers the visitor emblematic places. Despite its sun and beach tourism, Calpe is a town that stands out for its history. The first archaeological remains date back to the Bronze Age, when the remains of burial sites and some dwellings were found. However, it was during the Roman Empire when the area really became important due to its strategic location, facing the sea and next to the salt mines.

You can visit the old salting factory, where the fish was preserved, which is now the Roman ruins of Baños de la Reina. Numerous pirates also passed through these lands and the Torre de la Peça and the remains of the defensive wall date back to this period.